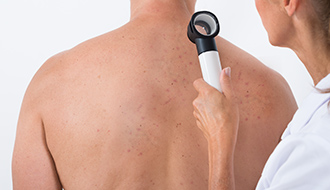 SHORTCUTS Causes Next Steps FAQ
Scarlet fever is an infectious disease caused by bacteria that live on the skin or in the throat, with the main symptom of a pinkish-red rash.

The main feature of scarlet fever is a distinctive pink-red rash. Scarlet fever usually begins with a sore throat or skin infection like impetigo. The early stage usually also comes with headache, flushed cheeks, high temperature (38.3C/101F and above), and a swollen tongue. As the infection develops over the next days, the rash appears. It is pink in colour, usually occurring on the chest and stomach, and then spreads to other areas including ears and neck.

The rash
The surface of the rash feels like sandpaper to touch. It may be itchy. On lighter skin, it appears pink; on darker skin, it may be more difficult to see, although the sandpaper texture will be palpable.

Progression of scarlet fever symptoms usually develop within 2-5 days of infection, though the time between exposure and appearance of symptoms can be from one to seven days.

Scarlet fever is much less common nowadays than it was in the past, but there have been some significant outbreaks in recent years (2,830 cases between late 2013 and early 2014, and 5,746 cases the following year).

The reason for this has not been established. Scarlet fever is most common in children. Scarlet fever needs to be treated with antibiotics as early as possible, so it is helpful to be aware of the signs and symptoms.

Scarlet fever is caused by the Streptococcus pyogenes bacteria, which usually lives in the skin or throat without problems, which can in some cases release toxins which cause disease. It is highly contagious, and spread through sneezing, coughing, and via the breath.

What to do next

If you have recently been exposed to someone with scarlet fever or are experiencing unusual symptoms, please make an appointment to come and speak to us. Give us a call or use our online booking option.

If a case of scarlet fever goes untreated, or if the antibiotics prescribed are not taken in full, there is a risk of developing rheumatic fever. This can affect the kidneys and cause more serious symptoms.

Yes, very much so. In untreated cases, scarlet fever can be contagious for up to ten days. The risk of passing on a case of scarlet fever is reduced within 24 hours of starting antibiotic treatment.

Who is most at risk of contracting scarlet fever?

Scarlet fever appears mostly in children. Around 80% of cases appear in children under the age of 10, and is especially prevalent around 4 years old. Adults can catch the disease, but this is less common.

Dr Juhasz has been a GP for more than 20 years. After her medical degree at Cambridge she trained as a GP in south-east London, where ...

Dr Juhasz is a highly experienced doctor with more than 20 years of experience as a GP. With a medical degree at Cambridge & training as a GP in south-east London, where she worked as a GP partner until 2013. A wide range of general medical experience and excellence ...

An established private GP with extensive experience gained in hospitals and clinical settings in departments of general medicine and ...

Dr Iffat Azim has gained extensive experience as a doctor in hospitals and clinical settings. This happened in departments of general medicine, general practice, obstetrics & gynaecology and paediatrics. High standard clinical care is what she strives for, ...

Designed by Digital Aesthetics
Copyright © 1998 - 2022 City Walk-in Clinic Ltd. All Rights Reserved.
Top
We use cookies on our website to give you the most relevant experience by remembering your preferences and repeat visits. By clicking “Accept All”, you consent to the use of ALL the cookies. However, you may visit "Cookie Settings" to provide a controlled consent.
Cookie SettingsAccept All
Manage consent