Our telephone lines open Monday at 7:30 am 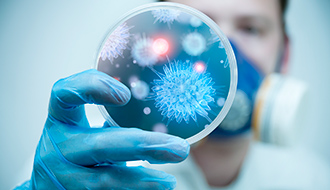 SHORTCUTS Causes Next Steps FAQ
There are a number of infections that can affect the penis. The most common of these include non-gonococcal or non-specific urethritis (NGU or NSU), balanitis (balanoposthitis), chlamydia, gonorrhea, and syphilis.

The most common penis infection is non-gonococcal or non-specific urethritis (NSU or NGU). Around 80,000 men are diagnosed with these conditions every year (it is more difficult to diagnose urethritis in women because it may not cause as many symptoms). Other common infections affecting the penis include balanitis (also sometimes called balanoposthitis), chlamydia, gonorrhea, and syphilis. These last three are sexually transmitted.

The symptoms of infection will vary depending on the bacteria causing the infection and the person who has it. In general, some typical symptoms of a penis infection include:

Symptoms of balanitis include inflammation (redness and swelling) and soreness or pain around the head of the penis or foreskin; a thick discharge beneath the foreskin; a rash or itchy patch on the penis; noticeable and unpleasant odour; and pain on urination (dysuria).

Chlamydia can cause pain on urination, pain in the testicles, and a white, cloudy or watery discharge from the tip of the penis.

Gonorrhoea can cause pain on urination, inflammation of the foreskin, and an unusual white, yellow or green discharge from the tip of the penis

Syphilis develops in four stages; in the primary stage, if there are any symptoms at all, the most noticeable one would be a sore, known as a chancre, which is usually painless, and which develops on or around the penis. See our sexual health pages for more information.

Urethritis means inflammation of the urethra (the tube through which urine passes out of the body). It is usually, but not always, caused by infection. Because of this, the best way to avoid it is to practice safer sex.

Balanitis is a condition where the head of the penis (glans) becomes inflamed. Sometimes balanitis can also affect the foreskin, and is more common in men who have not been circumcised. It is usually caused by an irritation of the skin caused by a build-up of smegma, which happens either due to poor hygiene, or in young boys, when the foreskin is too tight to pull back. Balanitis can also be caused by phimosis (a narrowing of the opening of the foreskin), which traps penile discharge under the foreskin and can lead to an overgrowth of bad bacteria.

These three infections are sexually transmitted. Each present with different symptoms and in some cases you may be asymptomatic even though you are carrying the infection. See our symptoms and sexual health pages for more information.”

The main causes of an infection in the penis are:

Smegma is a natural lubricant that is found on the head of the penis (glans) and beneath the foreskin. If you don’t wash your penis daily, the smegma can build up, leading to strong odour, preventing the movement of the foreskin, and in some cases, can lead to a build-up of bad bacteria. This can lead to an inflammation of the glans, called balanitis.

What to do next

We can help you with any concerns you have about your sexual health, give you a diagnosis and help you with any existing symptoms or conditions. Give us a call or make an appointment to speak to one of our team today. You can request a male doctor if you prefer.

How are penis infections treated?

If you are experiencing any symptoms of a bacterial infection or STI, speak to one of our doctors about getting a diagnosis and possible treatment. Most infections are treated easily with medications such as antifungal creams, corticosteroids, or antibiotics. In some cases, you may need to avoid certain brands of soap, if your symptoms are due to a skin irritation.

Does personal hygiene make a difference in terms of infection?

Will I have to take antibiotics if I have a penis infection?

If you have a bacterial infection, the doctor may prescribe a seven-day course of oral antibiotic tablets such as flucloxacillin or metronidazole, depending on the diagnosis.

Designed by Digital Aesthetics
Copyright © 1998 - 2022 City Walk-in Clinic Ltd. All Rights Reserved.
Top
We use cookies on our website to give you the most relevant experience by remembering your preferences and repeat visits. By clicking “Accept All”, you consent to the use of ALL the cookies. However, you may visit "Cookie Settings" to provide a controlled consent.
Cookie SettingsAccept All
Manage consent